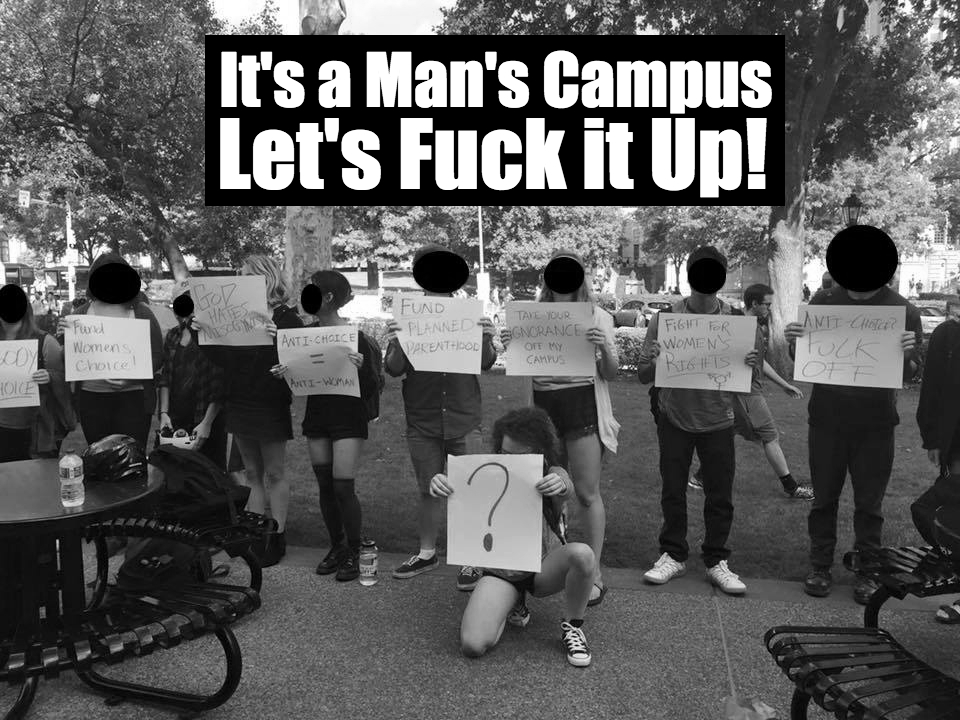 Notes toward organizing an anarcha-feminist assault on campus rape culture.

by Angel and Brett

While academia theoretically exists as a space reserved for education and intellectual growth, universities across the country have been making headlines as they continue to fail to provide safe and equal access for women, gender nonconforming folks, and people of color—all of whom are at greater risk for sexual violence.

But the university is not alone in its failure. Patriarchy permeates social life on every campus; from frat row to sports teams, and often even to the social justice organizations that claim to fight it. We’ve all heard the statistics by now. One in four of our classmates will be assaulted at some point in their academic career, every 21 hours there is a rape on an American college campus, and on and on.

To assert that sexual assault is simply a failure of the university to provide proper security or advocacy groups is to completely ignore the roots of the epidemic. Sexual assault doesn’t thrive because there aren’t enough police on campus, but rather because assault is the violent enforcement of male dominance in the social sphere. [“Reality isn’t Safe” explores this premise in greater depth.]

Despite the programs discussing and advocating prevention measures, the painfully inadequate counseling centers, and the countless ways to navigate the labyrinth that is Title IX, none of the existing efforts address the heart of the issue: the fucking patriarchy. Obviously men are not the only ones committing assault, but rape culture is deeply tied to the patriarchal attitudes that surround sex and intimacy. Rape culture is a frontline in the social war, and even the most marginalized person might choose the side with more power.

Until we find concrete ways to disrupt and deconstruct both institutionalized patriarchal structures and their socio-cultural roots, sexual assault will remain a staple of the college experience.

To begin, we need to analyze the ways in which the administration, media, and campus culture rationalize and trivialize assault, not as problematic or internalized attitudes, but for what they really are: strategies in perpetuating and reifying systems of patriarchy. All social hierarchy, from gender to race to class, is imposed by the threat of violence. It’s irrelevant whether a media pundit understands their logic as serving an agenda of strategic oppression or as a “rational” and “objective” approach to a contentious issue; the logic remains the same, with the same violent impacts, and it is all the more insidious.

Analysis is a continuous process, as patriarchy has proven to be one of the most flexible hierarchies in that it is quick to absorb the aesthetic of our opposition without detracting from the violence of male dominance. We need not look farther than the irony of having a sexist like Joe Biden speak at Pitt for the “It’s On Us” campaign as proof of this.1, 2 We have to constantly challenge ourselves to hash out the details of enemy strategies in order to better defend and empower ourselves.

The most prevalent strategy in seizing and erasing a survivor’s narrative is the tactical redirection of classic American individualism.

First, the stage is set with a “prevention” discourse that asserts that the people most at risk of facing violence (women, queer folks) need to be the ones responsible for preventing it. It’s almost cliché to point out that our society teaches people how to avoid assault instead of teaching people not to rape in the fucking first place. What this discourse really teaches us is how to live in fear, how to confine our self-expression to the culturally accepted practices that reproduce patriarchy. The result is that victim-blaming is effortlessly disguised in the rhetoric of prevention discourse: shouldn’t you have known not to leave your drink unattended at frat parties?

Second, what is objectively a social epidemic is quickly personalized, typically as an issue concerning only two individuals. This is an especially easy maneuver when the survivor has some sort of “romantic” history with the perpetrator.

Now with the stage set and the spotlight focused, the administration, media, or police can completely remove the survivor’s story from the broader socio-political context through tactics like victim-blaming, slut-shaming, and prude-shaming. Let’s be perfectly clear: assault has nothing to do with whether or not a survivor is drinking heavily and incapable of making sober decisions. Nor does it have anything to do with how a person dresses or where they choose to sleep at the end of the night. It has everything to do with the attacker refusing to respect boundaries and choosing to satisfy their urges with the understanding that they’re unlikely to face repercussions. The constant threat of character defamation is what keeps survivors silent and “illegitimate” in the public eye.

The final step in the tactical maneuvering of hyper-individualist logic is isolation. Now that the cumulative weight of prevention discourse, personalization, and character defamation has effectively stolen control of the survivor’s narrative, the social stigma of the whole ordeal can potentially isolate the survivor from any sort of support structure or “legitimate” framework for seeking justice. This is how the constant violence of patriarchy disguises itself, and is just one of many ways the broader social war remains hidden.

There are many more enemy strategies we can and should analyze. But we can only refine our notions and theories through immediately proceeding to action, or else we risk losing relevance in the constantly shifting socio-political terrain. In understanding the discursive and material practices of the administration, we can identify weak points in the authoritarian, patriarchal structures that define the University under capitalism. But so long as neoliberalism continues to creep onto our campus, Pitt will continue increasing tuition rates alongside the size of the student body. And if Pitt wants to do this, it will inevitably try to cover up the violence of campus culture. Because that’s just good business.

Anarcha-feminism is not merely intersectional feminism taken to its logical conclusion. It is a fluid framework that is capable of informing and evaluating our resistance to patriarchy within a broader vision for offensive revolutionary action.

Anarcha-feminism expands the feminist project of gender equality by asking questions that aim to facilitate the merger of means and ends. Do our efforts merely educate and raise awareness, or do they challenge the material conditions of patriarchy? Do our efforts disperse power and legitimacy, rather than concentrating it? Do they build our sense of autonomy? Do they empower survivors? Do they meet our needs?

In Part II, we’ll explore several of these questions as they relate to the struggle against patriarchy at Pitt.

In the meantime, here are some cool local projects to check out:

In Our Hands – a grassroots community accountability skill-building group based in Pittsburgh. They just put out the first issue of their zine!

Night Shade – a new crew of women and queer folks based in Oakland that are organizing a network of safe-houses, anti-fuckboi patrols, community support efforts and more! Contact studentsolidaritypgh@gmail.com and the Pittsburgh Student Solidarity Coalition will put you in touch with them.