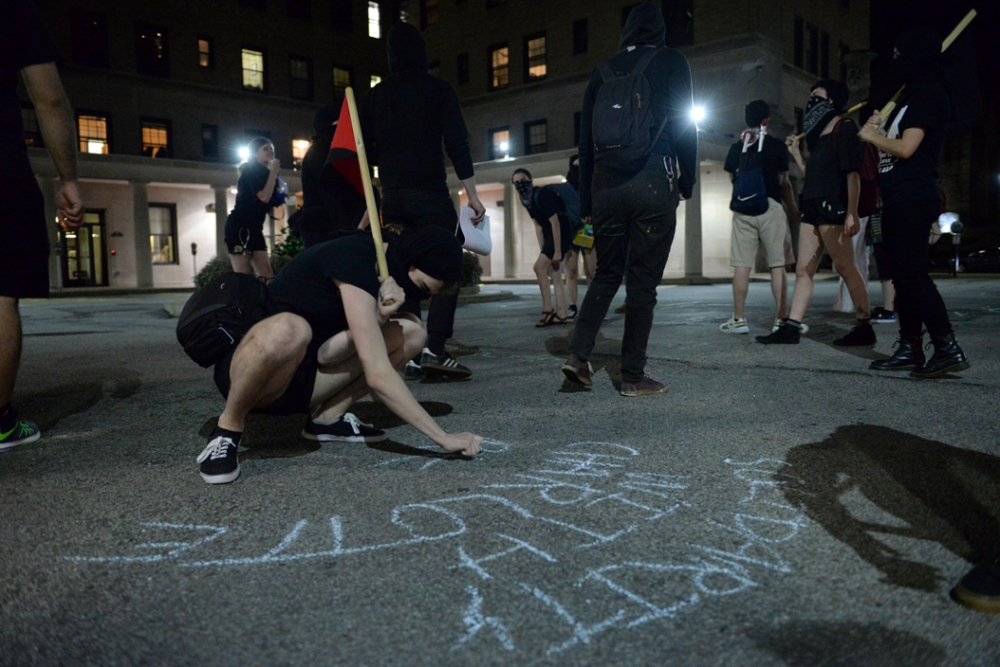 On Thursday, September 23rd, around 30-40 people (and probably just as many pigs) turned out for a last-minute action in solidarity with the uprising in Charlotte. The first chain text went out the night before, and a facebook event popped up shortly afterwords. In hindsight, making a facebook event called “Fuck a Police State” was pretty damn sus.

Honestly, we’re kinda lucky that we were able to pull off as much as we did without any immediate consequences. The University of Pittsburgh, and the surrounding Oakland neighborhood, is a fucking police state. City cops, Pitt police, Carnegie-Mellon police, Point Park police, and park rangers all have jurisdiction here (and this doesn’t include rent-a-cops like university security). The administration doesn’t even bother trying to cover up the University’s colonial project; Pitt raises tuition every single year, ensuring that each semester brings richer and whiter students to Oakland. Meanwhile, its legion of pigs occupies the remnants of the original community to stabilize the process. Student radicals are relatively isolated within the campus bubble, and so we’re left struggling to reinvent the wheel every few years. Thursday night was inspiring, but we also made some rookie mistakes, which will be the focus of this report back.

A little after 9pm, folks started gathering in Schenley Plaza, a commercial square disguised as a green patch in the heart of Pitt’s campus. Cops had the entire plaza surrounded with marked and unmarked cars well before anyone showed up. They kept a reasonable distance for the most part, but their scare tactics definitely succeeded in making people a little paranoid and anxious.

The majority of the crowd was in bloc, yet a lot of folks masked up smack-dab in the middle of the plaza—possibly even in view of cameras and police. Sure, the whole point is that you can’t be identified as “that person” beyond a reasonable doubt or whatever… but masking up in a public place still isn’t the greatest idea. Some of the more experienced crews had thought ahead and set up flashpoints, meeting in a secure location nearby before showing up in bloc together.

The callout originated from the autonomous student network, so the crowd consisted mostly of students and youngpunx, although a couple of Pittsburgh’s old guard were cool enough to show up. The few “veterans” brought some much needed street smarts; some acted as bike scouts, and one even provided the legal-support number they helped set up for the anti-Trump action that went down earlier in the day.

We spent like an hour chilling in the plaza, waiting for friends to show up, shooting the shit, chain-smoking, greeting new faces, trading stickers, fucking with the Pitt News journalists that showed up (“The organizers? You know, I’m not quite sure where they went, but just keep an eye out for a Mr. Alexander Berkman and a Miss Emma Goldman”), writing slogans in chalk, bonding with some down-as-fuck randos that happened to stop by and decided to join us, etc.

Just hanging out was a nice change of pace from the pre-action ritual of fancy speeches and political posturing we’re all so accustomed to, and it was pretty funny when the city pigs got bored and left, leaving the university pigs to monitor us all by their lonesome. But the informality also had its downsides:

1. A lot of people were casually masking and unmasking while they waited around for shit to start, increasing their chances of being identified with the bloc.

2. Some people don’t live on punk time; a few new faces left before the action even started.

3. A Pitt News photographer showed up and started taking pictures, and only a few people would occasionally confront him, or ask that he avoid photographing faces. Had more people decided to pause their conversations and stand with the folks that tried confronting him, we easily could have forced him to back down. Luckily for us, he was kind enough not to publish any photos with unmasked bloc participants.

4. Shit was impossible to get rolling. No one wanted to “start” the march, probably because no one wanted to take a leadership roll and be all like, “Hey yall, welcome to the protest, let’s get this party started!” Maybe there’s a way to balance the desire to be uncontrollable and the need for someone to hype up the crowd, but we ain’t found it yet.

The march finally started around 10pm, and omfg it almost went to shit within 20 seconds. We cut across Forbes Ave to get to the Cathedral of Learning—the university’s central building and prized phallic monument to gentrification—to put up some posters and chalk for students to gawk at on their way to class in the morning. The march was moving way too fast. The people that were breaking off to beautify campus had to jog to catch up, and the calls from the back to “slow the fuck down!” were drowned out by chants of “Oink oink, bang bang, every day the same ol’ thing!”

Several people broke off to chalk the Cathedral (which is against the student code of conduct or some shit), and two unmasked participants were immediately nabbed by university security. The rent-a-pig tried manhandling them until the cops could catch up, and only a couple people from the bloc even noticed or tried to help. Every time our friends tried to escape, the rent-a-pig would shove them against the wall. Meanwhile, the march was speeding away and the cops were closing in fast. Again, we got lucky; the two were able to get away mere seconds before the first cops got within arm’s reach.

Yeah, we’re young, but we should know by now that black bloc is not an aesthetic. It’s a tactic, and it only works when we have eachother’s backs and keep an eye on the folks that break off from the main group. And not to be that guy, but this was especially problematic since the two folks that were grabbed are people of color, and the predominately white black bloc failed to rally in their defense, let alone notice their absence. If we want to talk about being accomplices instead of “allies”, we need to take the same risks as our comrades of color, put ourselves in the line of fire, and use our privilege to physically disrupt state violence.

That being said, everyone caught up to the march safely, and the cops that tailed us were greeted with chants of “pigs quit your jobs!” and “all cops are bastards, A-C-A-B!” Our friends listening in on the police scanner were happy to report that this made the cops super butthurt.

The police quickly realized that we were gonna be rowdy, and so they remobilized the units that left and started closing in on the march. Except instead of taking the same A to B route that every single protest on campus has taken since time immemorial, we ditched the police by cutting into the quad outside of the student dorms. By now, the bloc realized how fast we were moving, so we took our time while decorating the dorm buildings with posters, chalk, markers, and graff mops. Some students opened their windows to cheer us on, joining in chants of “No Justice, No Peace, Abolish the Police!” A few kids even ran out of their dorms to join us. Of course, the Trump bros shouted their generic racist taunts, but no one dared come anywhere close enough to pick a real fight.

By the time we had ransacked the dorms and emerged back on Forbes Avenue, we realized there wasn’t a cop in sight. One of the campus police stations is conveniently located on Forbes. High-five to whoever planned the route.

We plastered the station in stickers, posters, and chalk slogans, and by the time the police caught back up we were already snaking through South Oakland. Some folks stayed behind to explain the action to passers-by, but around 30 of us were still going strong. At this point, we were able to hold the streets with confidence, slapping stickers, tagging shit, and chalking slogans all over the roads.

We went about our merry way for a bit, getting into more shouting matches with Trump bros, hugging the occasional randos that joined us, and using the maze of one-ways that is South O to our advantage. After one of our scouts informed us that the cops thought we were going for the freeway and had started building a presence on every street in an effort to kettle us, we made a 180 and went up Dawson Street. Once our police tail got uncomfortably close, we booked it to a staircase that leads into Panther Hollow and Schenley Park.

Shit was hype. We were cheering and hugging each other as we crossed the tracks into the park, where we went on a lovely evening stroll in our fresh new outfits. Our numbers stretched out on the park trails, we looked and felt five times our size. We shared spliffs and cigarettes, played word-guessing games, and soaked up some of dat first-night-of-Fall moonlight. After about a half an hour hike, we started saying our goodbyes as small groups took their different paths out of the park. I was in one of the last crews to leave, since some friends and I stumbled across a few bewildered stoners and decided to hang for a bit.

There were tons of young kids up to no good hanging around Schenley Park that night, so the undercovers that tried following us home no doubt followed just as many confused, turnt-up freshmen as they did anarchists. Sorry y’all, didn’t mean to drag cops into your beautiful night – stay uncontrollable!

For me, the night march is demonstrative of a broader learning curve in the autonomous youth scene. Sure, our numbers were small, and our street politics need practice. But if this is what we’re capable of with less than 24 hours of prep, the future is looking a tad less bleak. So long as we don’t ossify into another activist spectacle, occasionally taking the streets while changing nothing, I genuinely believe we’re capable of pushing the university struggle to its limits. But first, we need to learn to look out and care for one another, on and off the streets. And it couldn’t hurt to find ways to break out of the campus bubble; the OG Pittsburgh anarchists probably have some knowledge to pass on.

Still riding the comedown,
– some queer from the autonomous student network