All reports were submitted anonymously to Filler PGH or It’s Going Down.

Pittsburgh residents and organizers held a vigil and rally to remember Antwon Rose Jr. at the home of killer cop michael rosfeld.

Rosfeld had been released on a $250,000 unsecured bond (on a criminal homicide charge…) just a few hours prior, and so some folks coordinating as part of the steel city autonomous movement (SCAM) thought we’d welcome him home; the charging of michael rosfeld is a small victory, but justice demands that we take direct action towards the abolition of white supremacy.

We are outraged, saddened, yet unsurprised by the actions of the police. State-sponsored violence is how those in power uphold white supremacist capitalism. With this in mind, we also called attention to the history of local police brutality, commemorating Mark Daniels and Bruce Kelley Jr. among others recently murdered by the state. Successfully convicting rosfeld of homicide does not prove he is only ‘one bad apple’; there is a larger culture of police and city authorities who are complicit in state violence, and that must be accounted for.

It’s important that the community of Verona — the officer’s current neighborhood of residence — be made aware that they are living in close proximity to someone who did not hesitate to kill an unarmed black teen by shooting him three times: in the back, arm, and face.

During the demonstration, some neighbors shouted in support, while others made sure demonstrators did not go on their private property. There is a community divide, but there is necessity in confronting that divide. The demonstration served as a way to show where neighbors stand, and to elicit responses from residents. Police are public officials, and rosfeld’s address was publicly available. Rallying outside the jagoff’s residence is the necessary social consequence to murders committed by police.

After the action, dozens of folks decided to go back with more numbers and held their ground until around 11pm / midnight.

As an excerpt from a flyer that was distributed to neighbors reads,

[…] systemic racism is woven deeply into the greater Pittsburgh area. Because one of the most deeply segregated urban regions in the country is patrolled by cops that belong to a powerful right-wing union—the FOP. Because in this reality, the police are only harbingers of violence to communities of color; killing or incarcerating, creating trauma, breaking apart families. It was only 4 months ago that the Pittsburgh Police shot and killed Mark Daniels here, an unarmed 39-year-old grandfather, another black man killed by another white cop. This is the same policing system that, in 2010, jumped 18 year old Jordan Miles, beating him beyond recognition while he was walking to his grandmother’s house, drinking a soda the cops claimed was a gun.

To close, here is a quote from a report-back that was released after another autonomous home demonstration in Pittsburgh—this one from last October, taking place outside the home of the brutally violent officer andrew jacobs.

Cops aren’t afraid of their fellow cops, of their bosses, of courts or prosecutors or legislatures. But they’re afraid of us. A little research and some word of mouth is all it takes for us to bring the fight from our neighborhoods to theirs.

Organizing against police violence challenges the separation of people from political power, the social logic of the badge made material by the physical force of the baton. Power insulates individuals from the consequences of their actions. This power must be seized through collective action and abolished, disorienting the powerful by rejecting the justification for their every misdeed.

We have a message for every cop, every ICE agent, every judge, every politician—for all the agents of white supremacy who continue to separate families through “legal” violence:

Activists accept targeted retaliation as a basic fact of their work. It’s time the police reckon with something similar.

“I’m very comfortable with what I did. If either side doesn’t like it they know what to do.”
– Judge Jeffrey Manning.

The judge got one thing right: we know what to do.

(This quote is often erroneously attributed to rosfeld when in fact it was another white supremacist collaborator, the judge).

Demonstrations continue in Pittsburgh following the murder of seventeen year old Antwon Rose Jr., and as patriots in Judge Jeffrey Manning’s quiet suburban neighborhood were celebrating another year on stolen land, the peace was disturbed as rows of angry people chanted enroute to the judge’s house. Judge Jeffrey Manning of 535 Kingsberry Circle Mt. Lebanon PA, gave killer cop Michael Rosfeld a $250,000 unsecured bond on a criminal homicide charge. Never before in the state of PA has anyone charged with homicide been released on these terms, and released he was on the dime of the FOP the fucking day of his arrest.

This while seventeen year old Zaijuan Hester, who was charged with criminal attempted homicide, and was allegedly running from the traffic stop with Antwon, sits in jail without bond. We know the judges are not and will never be our allies, so of course shit is going down this way, but a little public shaming and intimidation to highlight just how much of a piece of shit Manning is is both empowering to those putting his shit on blast, and informative to the community he lurks in.

Everyone met up outside dude’s cul de sac in the grass listening to Jimmy Wopo and just kicking it, sharing water and perspectives about why they were there. This group was a lot smaller than the bigger street marches – about 35 people –  and was made up of Antwon’s community members, medics, legal observers, anarchists and antifascists, and black liberation activists. The mood was pretty posi with undertones of grief and anger about the situation, but in general people were feeling empowered and ready to storm this ding dong’s neighborhood. Folks silently marched single file in lines of two, some masked, some not; everyone with fists raised.

The chanting didn’t begin until the group arrived at Manning’s manor, where people began to shout, “What was his name? Antwon Rose Jr! How old was he? 17! Who did this? The police did this!” Speakers talked about the murder and the judge’s role in it all, songs were sung, and then the group reformed the two lines and marched through the neighborhood saying, “Three shots in the back, how you justify that?”

The pigs showed up late to the party and everyone was pretty much on to the next thing by the time several squad cars arrived. Everyone got out just fine. The second part of the day’s actions was to shut down the intersection at Connor and Gilkeson Road, a pretty big intersection for the amount of people who came out. This was right in front of a mall and a main route to various suburbanite July 4th parties, so that was tight. The small group shut shit down successfully with the help of a down ass semi driver who saw what was up and parked his rig in front of the exit route many cars were attempting to take. The cops were frazzled, a lot of fancy cars got fucked up hopping the median, and the intersection was held successfully for a good chunk of time in the 95 degree heat and direct sun.

One woman tried to drive her car through a group of about five, but that didn’t work out and she mostly got made fun of for like a half hour. Cops tried to pull at the heart strings of protesters by pleading for the ‘scared children’ in the blocked cars, met with the response, “Antwon was a scared kid.”

When the last car was turned around and bottomed out, the crew marched down the street with fists in the air singing, “Antwon Rose was a freedom fighter and he taught us how to fight; we gonna fight all day and night until we get it right. Which side are you on, my people? Which side are you on?” The semi driver honked and threw up a fist before trucking off.

Sixteen days ago, people came out into the streets in mass to protest Antwon’s murder, many for the first time. The first intersection shut down in front of the EPGH Police Dept was chaotic, powerful, sad, and confusing. On that first night, a cop tried to drive his cruiser through the crowd, and some intense in-fighting errupted when some folks decided to put their bodies in the way of the vehicle. There were arguments about weather white people should even be there, who the fuck are these people in masks, etc. Sixteen days later, at this demonstration, crews of all identities and backgrounds were tight and working together with understanding and respect for each other. Way more people were masked up, kids were helping each other figure out the best ways to tie t-shirts over their faces, road flares were embraced by everyone there, and everyone was reminding each other to use Signal. More crews are being formed, and they’re not planning on going away any time soon. The July 4 demo was def one of the smaller groups in the scope of things, but that tightness in the small number was super powerful. Friendships and comradery are being built in a way that will strengthen as we continue on in this fight, and forward.

All Cops Are Michael Rosfeld

The slideshow below is a compilation of graffiti actions that were claimed in solidarity with the movement, including one from comrades in Philly.

*the image below should read: East Pittsburgh police officer… 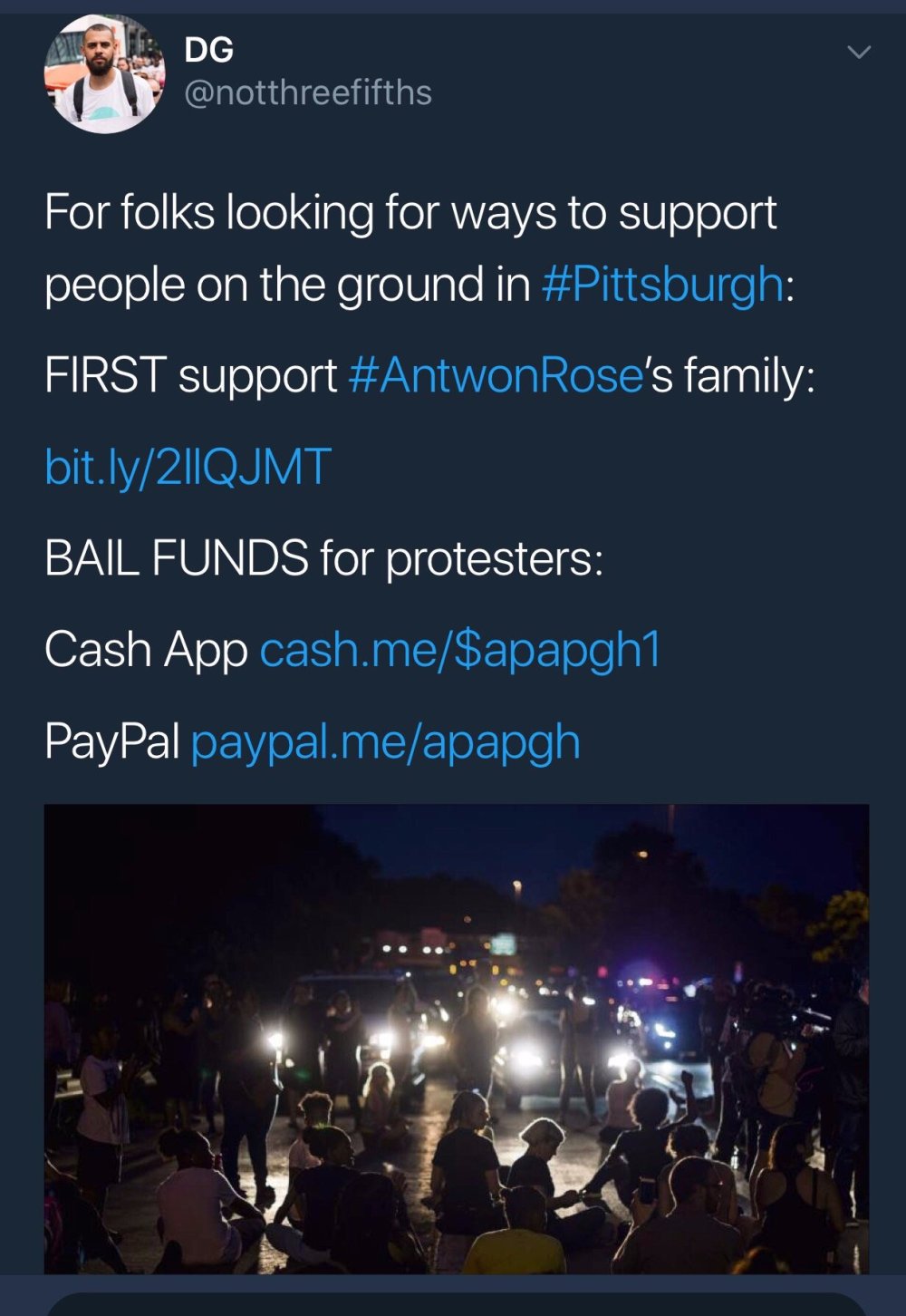 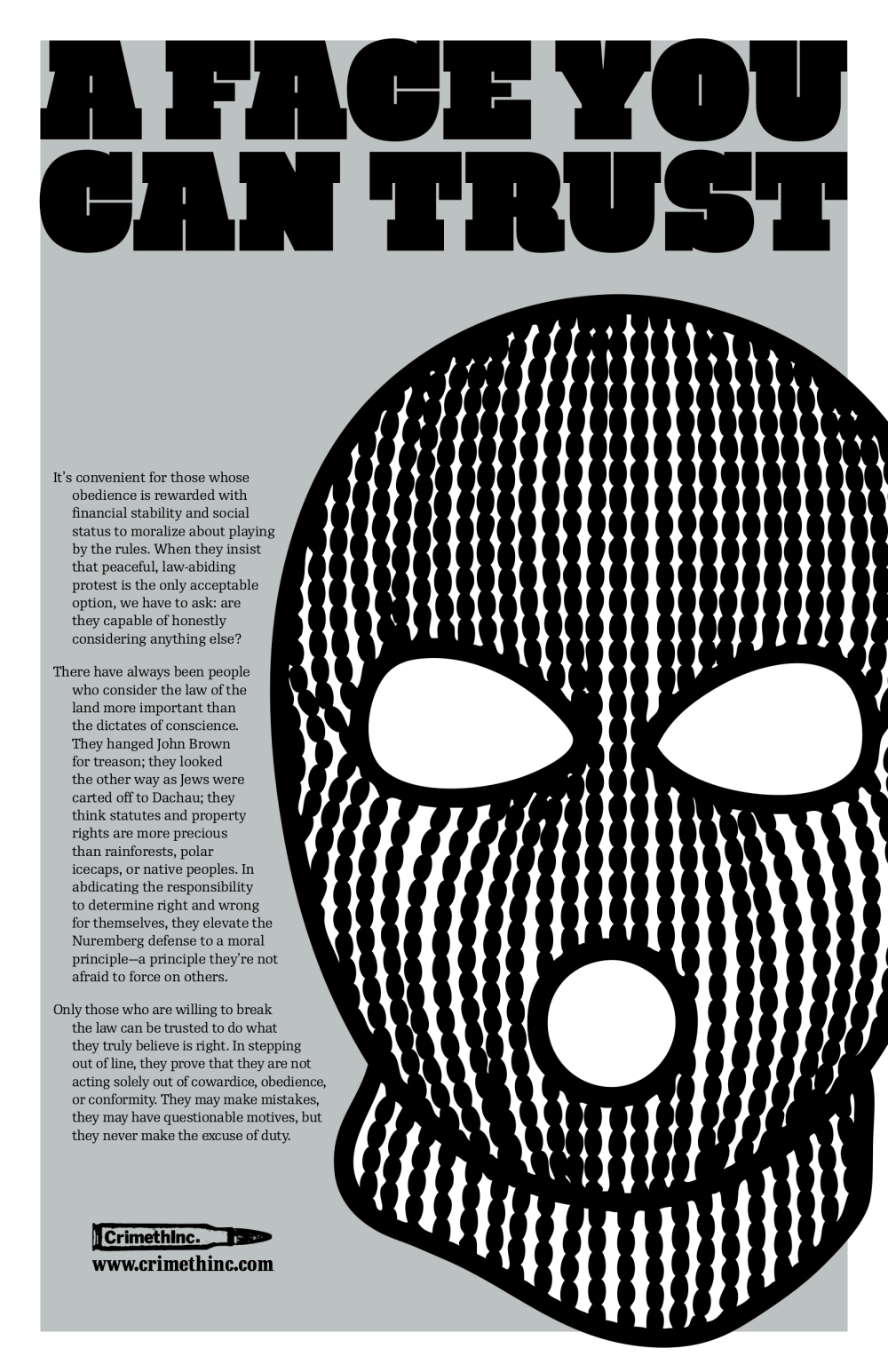 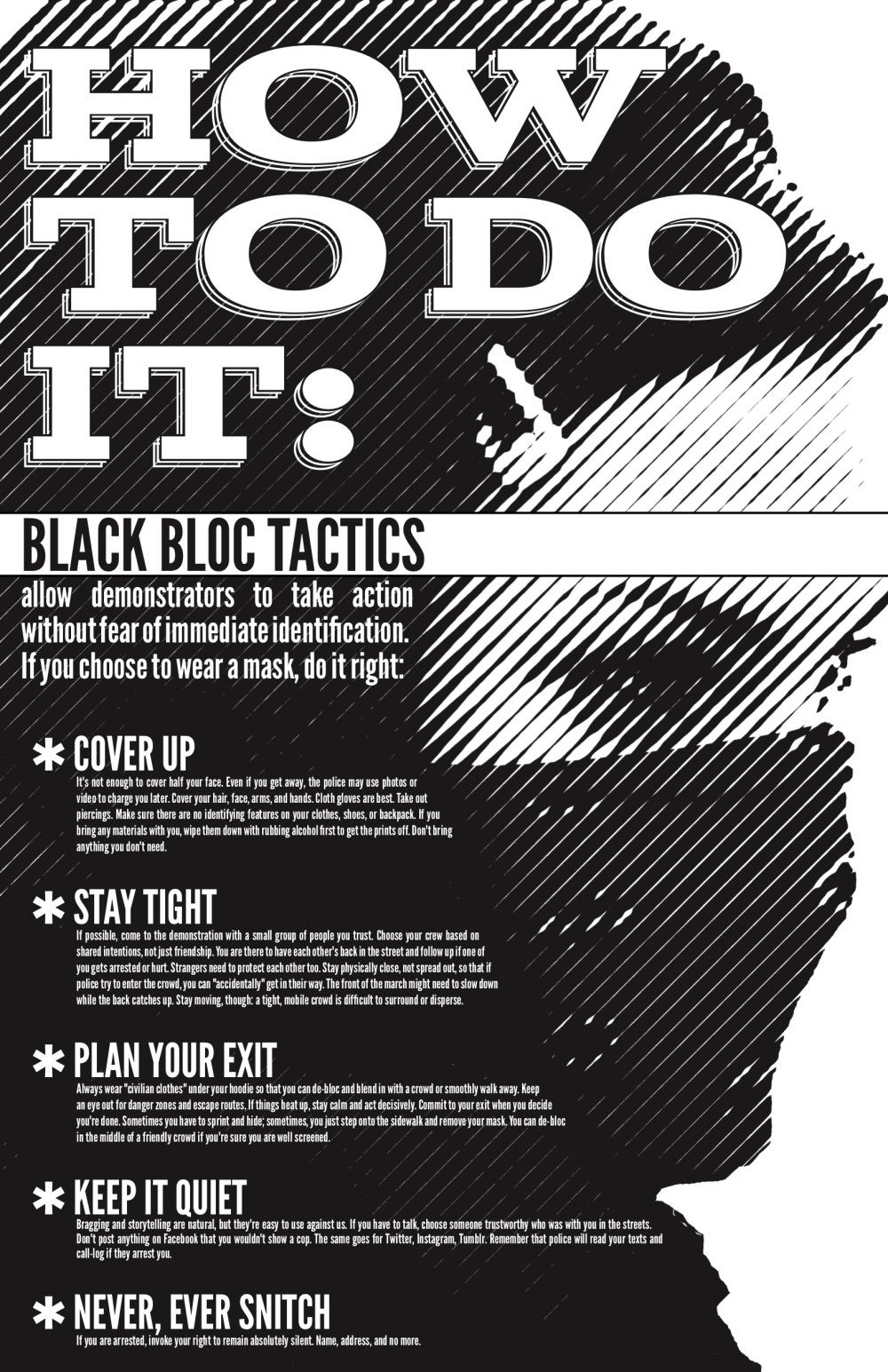 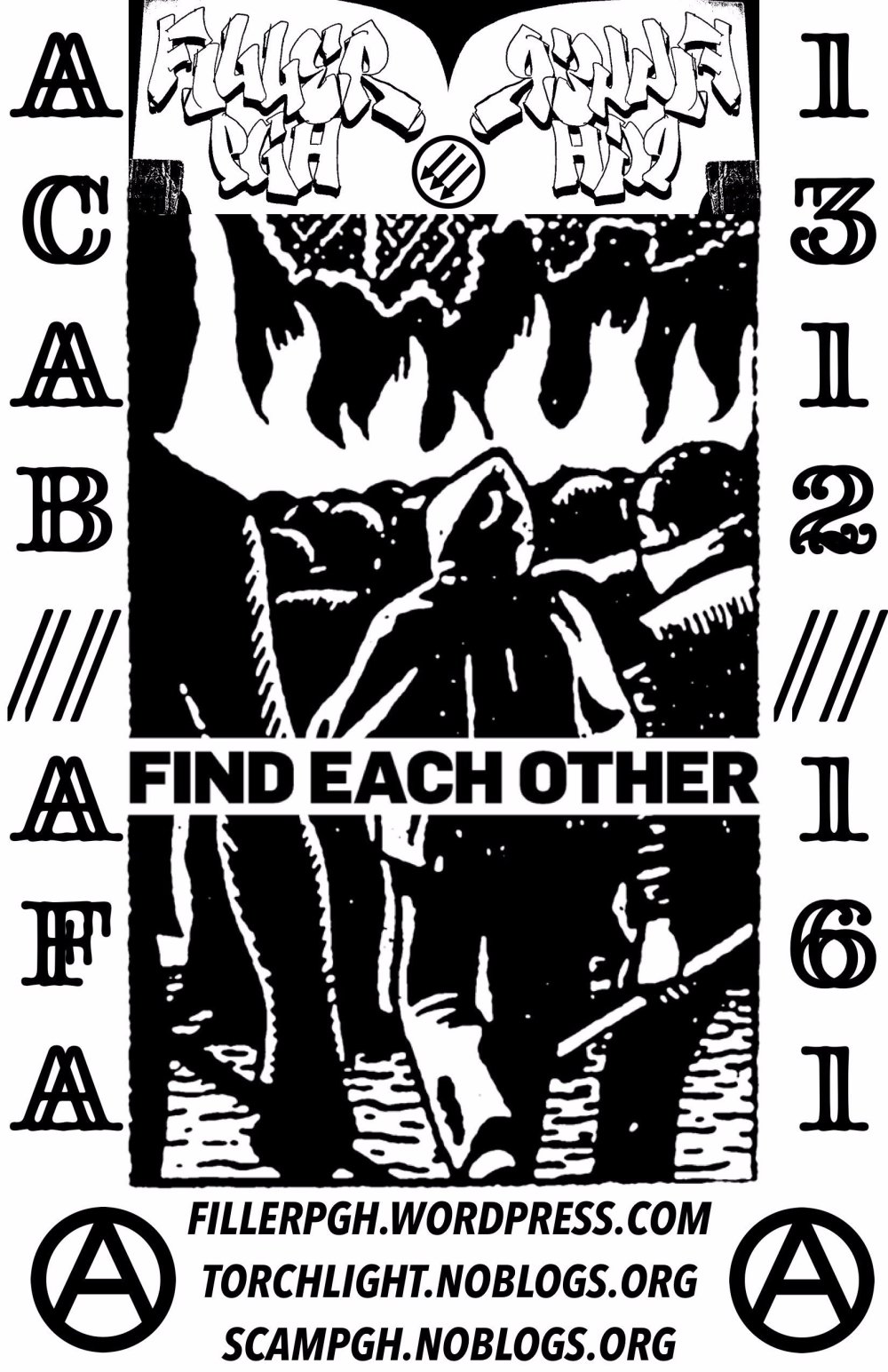