Sometime after midnight on Saturday, August 18th, a dozen or so anarchists rolled up on a Skull Fest (it’s a punk fest) show with a sound system, flags, banners, and goodie bags full of road flares, black masks, and pamphlets about the National Prison Strike.

From August 21st (the anniversary of Nat Turner’s revolt and of the assassination of Black Guerrilla George Jackson) through September 9th (the anniversary of the Attica prison uprising), prisoners from all across the so-called united states are rising against the modern plantation system.

As It’s Going Down writes,

“Already, the strike has spread into Canada, and numerous facilities around the US are already seeing hunger strikes pop off as prisoners issue demands. Prison officials are also cracking down on various facilities, shutting them down, and locking up prison rebel leaders as deep in the hole as they can.”

Since we figured Skull Fest punx probably know shit is fucked and might be down (?), we took the opportunity to incite our friends on the outside to act in solidarity with our friends who are locked down on the inside. Even small gestures like ours can subvert the isolation of prison, inviting the unrest that’s too often locked and hidden behind walls into our streets. 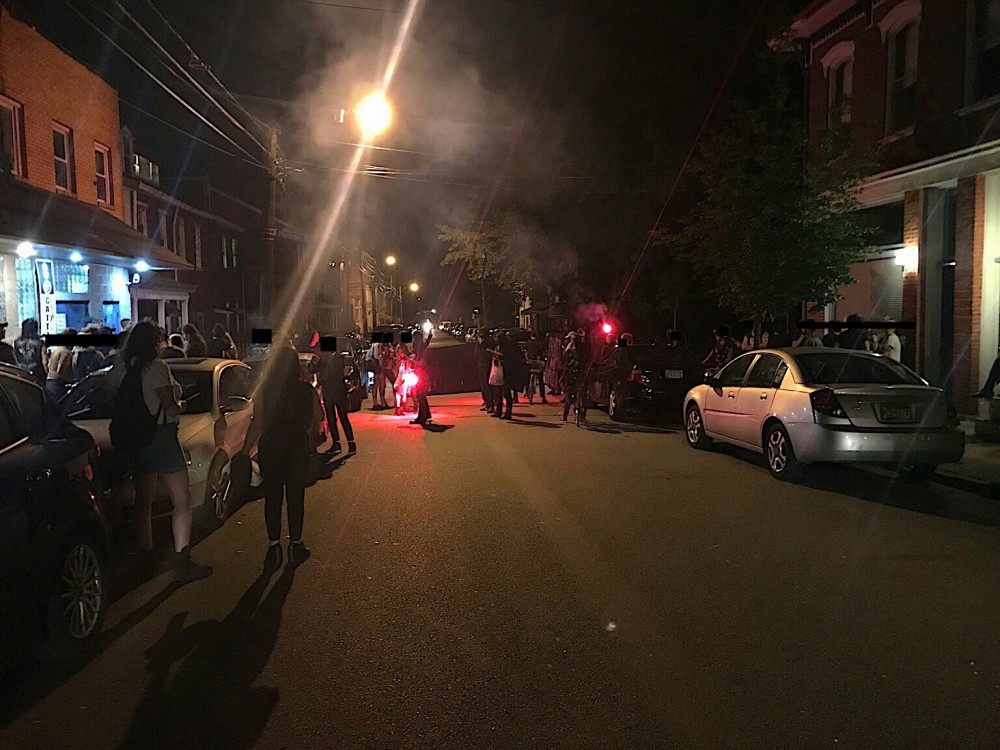 Out of the large crowd, a few punx showed interest in joining the march, and some actually did for a bit, which was tight. But tbh most remained indifferent and just kinda stared at us. One jag yelled, “Burn out already!!” If only he knew how many times we have (: …but pamphlets about the strike were distributed to the fest goers, and a few fists were raised. Punk is dead, blah blah. ANYWAYS, the march made its way up on to fucking Butler Street. What’s good, hipsters?

After leaving the show, we marched a short ways through Lawrenceville, distributing literature to some (surprisingly receptive?) folks at a few hipster bars. We dispersed shortly after the cops arrived, but not before getting a few laughs in first—this one pig’s tough-guy “who’s in charge?” routine devolved into him jogging from person to person straight-up pleading for someone, anyone, to talk to him. He had this sorta desperate look on his face, clearly just couldn’t process it. Dude was shook as fuck. The authors of this report would also like to add that we hope he winds up like those two screws who got shanked at Allegheny County Jail the other day.

It’s been a hot summer in Pittsburgh, but as the homies at Torchlight write,

“[Pittsburgh’s new protest restrictions] make it obvious that the cops are gaining confidence and worrying less about Pittsburgh going up like Ferguson.”

Spontaneous, unpredictable actions do more than show solidarity and “raise awareness” — they disrupt the state’s ability to use threats of repression to siphon unrest into the professional Left’s array of dead-end “community” dialogues and electoral campaigns. The new protest guidelines threaten to criminalize radical individuals, crews, and organizations who continue to organize beyond the self-appointed leaders and managers of the various movements. So let’s continue catching the pigs off guard, challenging their newfound confidence, and opening up space for further decentralized, autonomous action — by any means necessary.

Behind Enemy Lines probably said it better than us:

Immersed in political strategies
Government policies create endless catastrophes
and we all pay the price
when our movement becomes stagnant, anchored by apathy
We can’t just give up, we can’t just give in
There are no wasted attempts when it comes to action
The smallest act could cause a chain reaction
that could bring this entire system down
Light it up
Ignite a spark
Every single action could be the start
It will take all of our efforts to get out of the dark
You could be the one
that offers hope and inspiration
to everyone who feels defeated
and moves the depleted towards motivation
and helps the flame continue to burn
The most important thing that we still need to learn
is that we’re in this together, don’t shut out one another
Don’t ever forget that we depend on each other

For more on the prison strike, check out prisonstrike.com, It’s Going Down, Incarcerated Workers Organizing Committee, follow #PrisonStrike & plenty of other stuff.

For background information, strike demands, as well as a list of solidarity events, please go here.