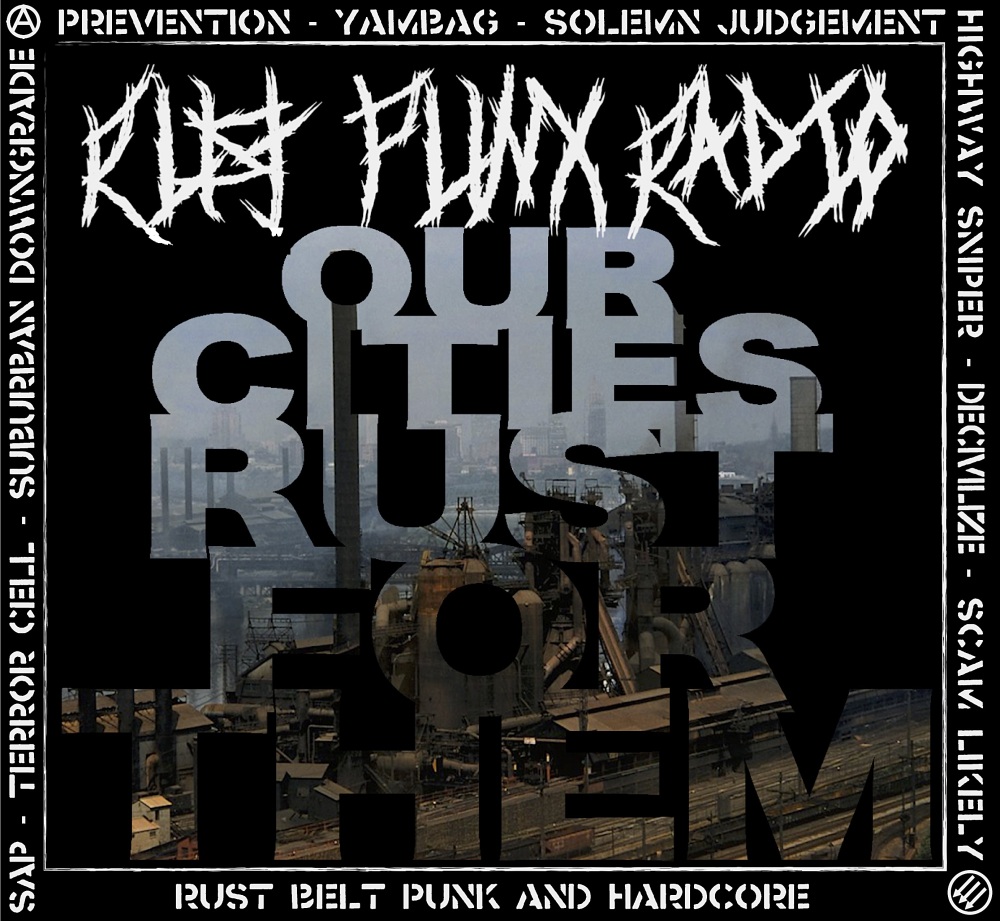 Rust Punx Radio is a show that highlights the latest in DIY punk & hardcore from across the so-called Rust Belt. Hosted by some kids from the Filler Distro, an anarchist zine distro, record label, and news website based in Pittsburgh, PA.

AVAILABLE FOR STREAMING ON

Who Am I? by YAMBAG from Cleveland, Ohio [Dropping 2020 thru Convulse Records]
https://yambag.bandcamp.com/releases

Classic track of the week: The Movement by RESIST AND EXIST [1998]
https://resistandexist.bandcamp.com/album/the-best-of-discography-album

If you’re not familiar with the Filler collective, part of our project is to highlight local news that’s relevant to the anarchist movement in Pittsburgh.

2020’s been wild so far, so here’s a brief recap of some of the autonomous individual and small group actions that you might have missed.

Starting around March 1st, stickers with anti-police, anti-racist, and pro-neighbor messages started going up all across the East End, the most prominent of which featured a friendly cartoon chameleon and the message “Fuck Cops, Love Neighbors.”

On March 5th, ATMs owned by PNC bank were sabotaged in retaliation for the bank’s collaboration in the construction of the Mountain Valley Pipeline. In a communique claiming responsibility for the action, an anarchist crew called ‘Guerrilla Biscuits’ stated,

“Last night, we sabotaged 7 ATMs […] by jamming adhesive-soaked plastic rectangles into their card slots. It was quick, easy, fun, and no one even gave us a second glance—you should try it sometime. Whether it’s because of the cold, a health precaution, or for criminal direct action… one day we’ll all wear gloves and masks.”

On March 6th, Nazi propaganda stickers were spotted and removed by anti-fascists in Polish Hill.

On March 9th, a variety of anarchist and anti-fascist posters were seen wheatpasted across Polish Hill.

On March 30th, the North Shore Police Memorial was vandalized with spraypaint that read “fuck the pigs.”

All throughout April, the corporate media felt really sorry for all the nice landlords who didn’t get their rent checks. Won’t someone please think of the landlords?

Sometime in early April, a CCTV camera was destroyed in Oakland.

On April 13th, the Allegheny County Jail began releases hundreds of inmates due to the COVID-19 pandemic. If you want to support the abolitionist movement in Pittsburgh, we recommend checking out the Bukit Community Bail Fund and Dignity Act, among others.

On May Day, an autonomous crew coordinated out a series of banner drops in support of the 5 Global Demands which is a decentralized campaign that is mobilizing in light of the COVID-19 pandemic. In a communique claiming responsibility for the action, the group stated,

“Too many of us in Pittsburgh believe that the course of the response to this pandemic is out of our control, that we can only make the best of plans and actions handed down from on high by politicians, landlords, and business owners. It does not have to be that way… our power lies in our autonomy and our solidarity—together, we can all protect one another.”

On May 7th, several American flags were stolen and burned in solidarity with anarchist comrades facing an illegal eviction.

On May 9th, unknown individuals dropped piles of sand at the entrance to City Hall, partially blockading access to the building. The action was taken in retaliation to the city’s decision to close the Polish Hill skatepark by dumping sand all over it.

On May 12th, a gold exchange store located off of Liberty Avenue in Bloomfield got its windows smashed up.

And lastly, we’d like to give a quick shout out the folks who have escaped Pittsburgh Community Corrections so far this year. Most recent police reports indicate that at least two of yinz are still breathing fresh air – godspeed to the ungovernable!

“WE KNEW WE COULDN’T MAKE IT ILLEGAL TO BE EITHER AGAINST THE WAR OR BLACK, BUT BY GETTING THE PUBLIC TO ASSOCIATE THE HIPPIES WITH MARIJUANA AND BLACKS WITH HEROIN. AND THEN CRIMINALIZING BOTH HEAVILY, WE COULD DISRUPT THOSE COMMUNITIES. WE COULD ARREST THEIR LEADERS, RAID THEIR HOMES, BREAK UP THEIR MEETINGS, AND VILIFY THME NIGHT AFTER NIGHT ON THE EVENING NEWS. DID WE KNOW WE WERE LYING ABOUT THE DRUGS? OF COURSE WE DID.”

OVERSTEP
SUSPECT
WASH AWAY THE NAMES.

OVERSTEP
COALESCE
MEN ARE LOCKED AWAY.

OVERSTEP
SUPPRESS
COUNTING DOWN THE DAYS.

RACIST MACHINES,
OILED IN BLOOD.
CREATION OF THE CELL
OUTCAST, THEY STOOD.

Gaza – 500 children dead, hospitals bombed
Billions in weapons to SAAF – while Yemenis starve
Unmanned aerial gunships snuffing out innocent lives
And meanwhile back on the homefront
Thousands of families torn apart
Ripped from their lives and deported
A typical legacy of abuse
From Clinton to Bolton

I’m sick of the fucking nonsense that y’all spout
have you ever done something that wasn’t for yourself ?
you’ll run your mouth when no one‘s around but you won’t keep me down
you’re an enemy to no one except yourself
thinking you’re so high up you can’t get knocked down
I can stick my nose up too
I can pretend to be better than you
you’re scared senseless to face your vices
you’ll judge those for using their voices
spitting and screaming waiting to be heard
you’ll live in comfort off of those who suffer
so you could be the righteous ones
say something to my face
but I know you won’t do anything
and I just wish that you’d choke
on every shallow excuse
that comes out of your throat
God forbid you have a back bone
you ignored the cries
of your friends
who begged you to have their backs
you left a knife in it instead

(sample from the documentary East of Liberty)

keep wasting all our fucking time
jagoffs tow their party-line
“Dont write ACAB on that sign
Never ever speak your mind!”

radicals are burning out ,
from pushing for event turnout,
to build the org, to win reform,
to hardly change the social norm

talking heads wont ever stop,
working hard to be a cop,
but just because you pay their rent,
doesn’t meann you won’t be dead!

they’ll promise you a good career
swear that they won’t interfere
You joined up, or so I hear
Young and dumb and so sincere

Here in Pittsburgh, so called radicals are collaborating
with the Bloomfield development corporation .
The BDC wants to bulldoze a grocery store
to build a yuppie condo in order to attract the tech industry.

and by legitimizing a ~ “dialogue” ~ thru events
that the BDC controls, these sellouts are deliberately
channeling community anger into a dead end
just so they can boost their NGO organizing careers.

From the Hill District to East Liberty, we’ve seen this before.

radicals are burning out ,
from pushing for event turnout,
to build the org, to win reform,
young and dumb and so sincere

I’m trapped inside,
For days on end,
There’s no way out,
The crisis deepens.

Blaming the other,
Divided by hate,
Racist lies,
Sold by the state.

The world’s a mess,
I am distressed.

MONEY RULES THE EARTH
MONEY KILLS THE WORKERS
WHO MAKE YOUR CLOTHES, TO SURVIVE
AND GET PAID SHIT
CAPITALISM CREATES DEATH 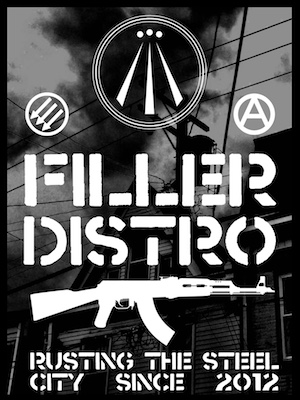